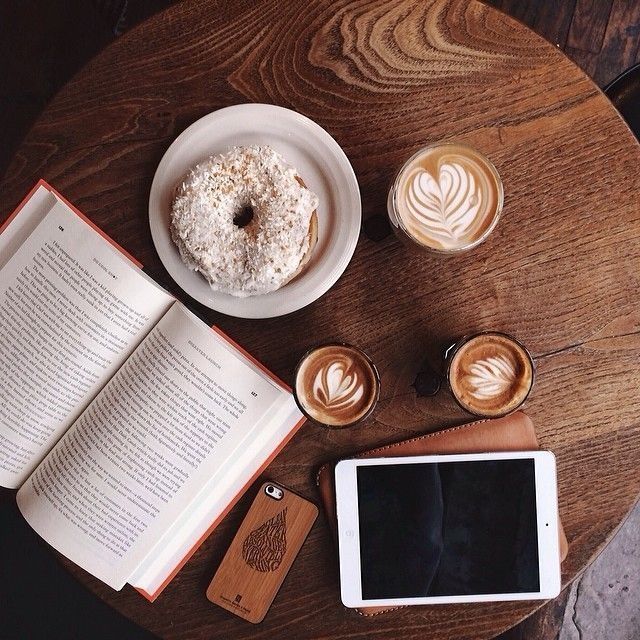 It was a small, private coffee shop that made you feel hugged by the pillows on the homey couches, that convinced you you were home, spoiled your nose with the candles whose fragrance changed with the seasons. It was warm when it was windy and cold outside, and it was cool when the day decided to render the gallons of deodorant useless. It was a haven for coffee-drinkers and for those in need of a pause in their days.

It was her afternoon off. It was part of her week where she treated herself to anything she wanted and there was no guilt allowed. No clients, company, emails, or calls were acceptable. Monday afternoon was dedicated to her and only to her. It might have been the most mundane and moody part of the week but she turned it into something she looked forward to.

She had ordered a vanilla latte with extra whipped cream and chocolate chips (regular black coffee was reserved for every other day) and a sinful dessert. She watched the steam rise from her mug, dipping her finger into the cream and licking it off. Her book was open and waiting for her but her mind felt like floating somewhere between the worlds. She finished the cream and stared out of the window, sagging against the padded chair. She didn’t reflect on what she had and wanted, about what she had lost, about anything that brought her happiness and made her sad. She didn’t think about any of it and yet thought about it all.

She didn’t notice the handsome stranger just three tables away who kept looking at her from behind his book.

First, he noticed her because they were reading the same book. Then, he noticed the thick black lashes circling her beautiful and thoughtful eyes. Then he saw her full lips and how they wrapped around her finger, licking off the whipped cream. He watched her stare out of the window, her face relaxed but intense, like she was aware of the entire world, like she knew and understood everything and accepted it. She furrowed her brow and he wanted to know why. She smirked and he smirked with her. She took a sip of her hot beverage and he licked her bottom lip as if he had just done that. She was mesmerizing. She hypnotized his eyes not to look away.

His hands collected his things and his coffee, and his legs carried him toward her before he realized any of it.

The sound of the chair screeching against the tiles, pulled her away from her revelry.

“Do you mind if I join you?” he asked, hoping she wasn’t immune to his smile.

“Seems like I didn’ have much say in it, seeing that you’re sitting already,” she teased, her eyes appraising him.

“I can help you with that,” she quipped.

“Don’t break my heart already,” he said, grabbing his chest. “It can’t take it.” She shrugged her shoulders, sipping her drink and watching him through her lashes. “I am actually starting my own extremely exclusive book club and want you to join.”

“There can only be two people in it and we’re meeting for dinner tonight. It’s mandatory.” He grinned. “What do you say?”

She took her time responding. She took a bite of her muffin and a long sip of her latte. “What is the name of it?”

His smile stretched. “You and me.”

Laughter bubbled out of her. “Wow, cheesy. We’ll need to change the name asap.”

“I thought that was taking it too far. Let me make it up to you for having to hear that at dinner.”

“What is wrong with making it up to me now with pastry and coffee?”

“We have so much in common,” she said and laughed softly.

6 thoughts on “Books, Coffee, and Pastry”